After college and a solo backpacking trip around Europe – during which Sarah got continually lost – Sarah begins work as a journalist, covering Capitol Hill. Unfortunately, Sarah cannot understand the thick drawls of the U.S. Senators from Alabama, resulting in many unintentional misquotes. Sarah is groped by one octogenarian politician, sumo-bumped off a subway car by Ted Kennedy, and unsuccessfully sued by the chief of staff to a corrupt U.S. Congresswoman.  Sarah also works briefly as an on-air correspondent for e! Entertainment Network, until the e! producers realize that Capitol Hill isn’t, by any stretch of the imagination, what one might call sexy. 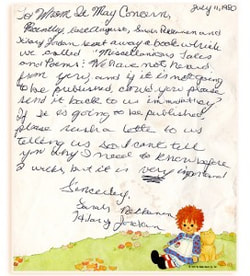 Sarah takes a job at Gannett New Service/USAToday, covering Capitol Hill. Sarah is assigned to cover the White House Correspondents Dinner and ride in the Presidential motorcade to the dinner. Sarah convinces a White House aide to let her stick her head out of the limousine moon-roof during the ride and wave to onlookers.  Later, her triumph is tempered by the fact that bouncers will not allow her into the Vanity Fair after-party. Sarah attempts entry three times in case the bouncers were just kidding.

Sarah takes a job writing features for the Baltimore Sun, and interviews the actor who played Greg Brady. She refrains from asking if he really made out with Marcia, but just barely.

Having left her journalism job to chase around after her three active sons, Sarah starts writing a column for Bethesda Magazine and begins work on a novel. She does not write it on Raggedy Ann stationery.
Sarah’s debut book, titled The Opposite of Me, is sold to the editor Sarah has always dreamed of working with: Greer Hendricks at Atria, an imprint of Simon & Schuster (oh, if only it were that easy – but Sarah is prohibiting any mention of the times she nearly hurled her computer across the room in frustration or wrote entire chapters that were far inferior to those in Miscellaneous Tales and Poems).
Atria publishes Sarah’s subsequent novels SKIPPING A BEAT, THESE GIRLS, THE BEST OF US, CATCHING AIR, THINGS YOU WON'T SAY, THE PERFECT NEIGHBORS and THE EVER AFTER.  Rights to Sarah’s books are sold in China, Australia, Germany, Italy, Holland, Poland, Canada, Russia and Spain and her novels become international bestsellers.

Sarah and her former editor Greer (by now her sister from another mister) decide to co-author a psychological thriller, The Wife Between Us, which is published by St. Martin's Press. It spends three months on the New York Times bestsellers list and is optioned by Amblin Entertainment, with Sarah and Greer hired to write the screenplay. Sarah and Greer write another creepy thriller, An Anonymous Girl, which will be released by St. Martin's Press on January 9, 2018.